Figured I’d try something new and write about my thoughts and things I’ve noticed while on this new experience.
Thursday, Oct. 16th
—
Arrived at the airport about 2.5 hours early because I was on a mission to go to the only Coffee Bean & Tea Leaf in Washington.  Unfortunately, it’s in terminal A and I was flying out of terminal N.  The line for security was fairly long, but no issues getting through.
I make my trek to my first destination, not too long of a walk, and of course it was well worth it!

As I was walking back to my terminal I overheard a lady as she walked by talking to her friend mention something about the low-iodine diet.  My head turned quicker than it has in a long time.  Of course, I didn’t ask them if they were going to the conference as well, but I know I should’ve.
Knowing that I’m going to a conference, I’m sitting there looking around for a sign that someone else on this flight is going for the same reason.  No luck, and I guess that’s one of the facts about this cancer, you don’t know if someone else has had it.  There’s no tell-tale signs.  Some pretty attractive ladies nonetheless!
This flight has those new slim seats, I actually think they do provide a bit more knee room, thank goodness! My chariot arrives!
Some loud and obnoxious kids…so glad for noise cancelling headphones!  However, my Zune doesn’t appear to want me to play games and listen to music at the same time.  #sad. I suppose that’s why I’m writing this though!
I’ll continue when I get into my room.  The real adventure begins bright and early tomorrow morning!

As we’re landing in Denver.
Friday, Oct. 17th
—
Whew.  After waiting around at the airport for the hotel shuttle for 85 minutes, then calling the hotel to find out we were on the wrong side of the terminal, finally got to bed at 1am this morning.  When we got to the registration desk, I saw this: 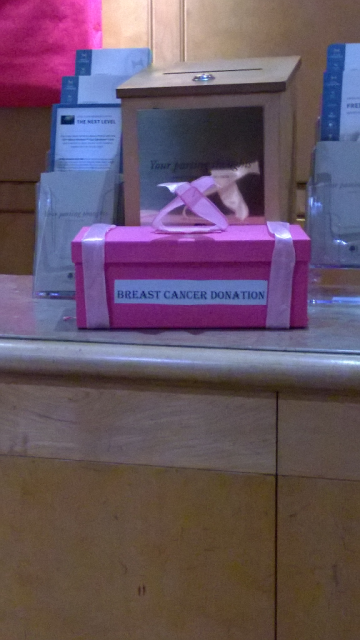 It made me wonder why there wasn’t one for Thyroid Cancer donations as well?  I mean you have a conference going on in your hotel all weekend…
Woke up at 6am to take my meds, got ready and met my Dad downstairs at 7am to get the rental car taken care of but the lady was nowhere to be found, so we got some food at the restaurant.  That was not that great.  Finished with that, got the car, made our way over to the ballroom to get checked in for the conference.  A lot of people in a small room…
Took our “goodie bags” and Dad took a bunch of literature and other information, went up to the room to relax for about 20 minutes before getting the party started.
Wow.
What can I say.  The open mic session was the first session and what a good way to start.  Several people went up to tell their stories, I was just about to go up there to share mine, but time had ran out.  That’s not something I would normally do in front of a room of strangers, but there was something comforting about it.  Maybe next time.  I would’ve enjoyed staying in that room and listening to every share their stories for a couple more hours, really touching.
Next session was with an Endocrinologist that specializes in thyroid tumors. She spoke about managing your TSH with thyroid cancer.  Very informative and lively discussion.
Next session had to do with lymph nodes, the first part was pretty technical and had me a bit lost.  However, having someone show us and talk to us about what they look for with an Ultrasound was awesome.  Being able to see the screen during an ultrasound and having no idea what they were looking at or how they know what to look for was a great mystery to me.  I’m glad she talked us through it.  After a while it opened up to questions and got more interesting as well as showing diagrams of the various neck compartments and other structures of the neck.  I looked at my surgery and pathology report numerous times during this session.  To compare what she was talking about and what I went through.
After this one went a bit longer than it was supposed to, we made it over to the quality of life with thyroid cancer session.  To my surprise it was a doctor from Chicago discussing some preliminary results from a survey I completed last year.  I was 1 of 101 males that responded while they had a little over 900 women respond.  I remember filling it out and bring pretty excited to be a part of it, and then to hear some of the results in person only validated that excitement.
After that was concluded we made it over to a session talking about Cancer survivorship, coping and the ling road ahead. Interesting talk from a two women, a surgeon who had several patients in the crowd and a Nurse Navigator.  The Nurse Navigator is someone who helps patients make their way through treatment, goes to appointments with them, and makes sure they’re asking the right questions.  I can’t imagine how awesome it would’ve been to have someone like this while I was going through my treatment.
We kind of decided to skip the last session for the day as I wasn’t terribly interested in any of the topics and really hungry from not eating lunch.
We found a little barbecue restaurant a couple miles away, pretty good food! I wasn’t ready to head back to the hotel so we went for a drive towards the mountains, went up to lookout mountain, but it was getting dark and frankly I had no idea where we were going, lol.  We made our way over to downtown Denver, stopped over at Mile High stadium took a couple pics,

One thought on “What. A. Weekend.”

Photography from around the PNW

exploration of the unknown

Kaitlyn in the Kitchen

Subie Life: For the Love of Subaru

The online source for Subaru News and Info!

All the Things I Wish I Could Say
Jon Hu Industries: Web Design & Photography

The Weblog of Erik Allas

Finding inspiration and exploration while living in Luxembourg