Happiness is just outside my window
Would it crash blowing 80-miles an hour?
Or is happiness a little more like knocking
On your door, and you just let it in?

Happiness is a firecracker sitting on my headboard
Happiness was never mine to hold
Careful child, light the fuse and get away
‘Cause happiness throws a shower of sparks

Happiness damn near destroys you
Breaks your faith to pieces on the floor
So you tell yourself, that’s enough for now
Happiness has a violent roar

Happiness is like the old man told me
Look for it, but you’ll never find it all
Let it go, live your life and leave it
Then one day, wake up and she’ll be home
Home, home, home 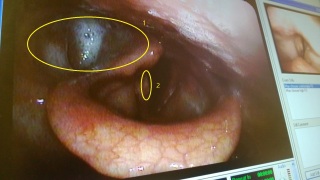 1. This is the “lagoon” that he spoke of. Notice it isn’t like that on the opposite side.
2. This is the Right Vocal Cord.  The yellowish color is the remaining material from the previous injections.  Over time this will dissolve.

One thought on “Happiness”

Photography from around the PNW

exploration of the unknown

Kaitlyn in the Kitchen

Subie Life: For the Love of Subaru

The online source for Subaru News and Info!

All the Things I Wish I Could Say
Jon Hu Industries: Web Design & Photography

The Weblog of Erik Allas

Finding inspiration and exploration while living in Luxembourg